Update on the Ultimate Electronics Helper

I have a huge update on what after publishing the Ultimate Electronics Helper. Apparently more people liked the projects as well as I've been featured on Hackaday! This is one of those websites that has been a staple of my internet diet since I first started going online. Thus I couldn't help but feel a tinge of pride when Hackaday wrote an article about my project!
You should check out what they wrote by clicking here.

I entered a few contests over on instructables and the voting is done for all of them. The results are in. This project won a prize in every single contest I entered!
I received the runner up prize in the Invention Challenge. The second prize in the Explore Science Contest. And the first prize in the Power Supply Contest.

This means there's several packages in the mail. Which is always a fun period. In the Explore Science Contest I'm getting a PocketLab One, which is basically a small box with several sensors. These sensors communicate over bluetooth to a phone, or computer, or whatever. So it's a super easy way to get quick sensor information and visualize it.

So I have now received my first prize from the Power Supply Contest in the mail. This was a groovy bluetooth speaker, the usual instructable shirt, and a drone from DJI! Now DJI is one of the two largest drone companies as of today. So this drone has some really advanced features!
This is by far the biggest prize I've ever received. I walk around just smiling from ear to ear 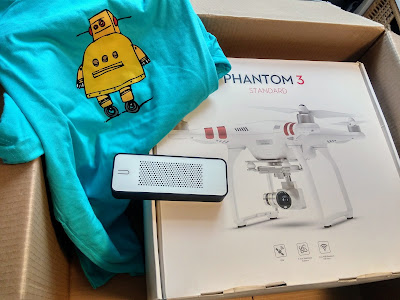