I was recently tasked with fixing a washing machine using my 3D printer. This may certainly sound complicated, but was actually a small task. So the case was that I needed to make a replacement wheel for the lower drawer inside the washing machine. One of the original wheels had just disappeared so I was given one of the remaining wheels to make a copy. 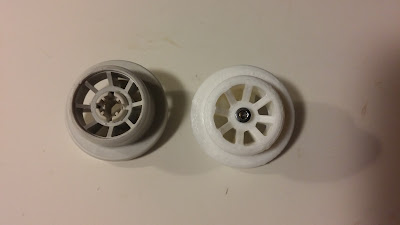 The original wheel on the left and the copy on the right.

As you can see in the pictures above the new wheel looks really good. However this was far from what this mission required. The 3D printed wheel had to perform well.
The original wheel had an interesting design in the way it was put together. It consisted of two parts: the main wheel, and the axle.
The axle was made of plastic that gripped the front end of the wheel, but still let it slide in the middle of the axle. The back part of the axle had two plastic nubs that gripped onto a metal rod on the drawer in the washing machine. This was only fastened by the friction caused by the two nubs being pressed onto the metal rod.

What proved to be the main challenge was replicating the axle on a regular FDM 3D printer. FDM is an acronym for Fused Deposition Modeling, which basically means that a hot nozzle melts plastic in a precise pattern, and then melts another pattern on top of the first. This creates several layers that make up a solid object. FDM is the the most common type of hobby 3D printers.
Because a FDM printer works in layers, it also means the finished object has a grain - analogous to wooden grain. And like wood grain, it is something to be wary of when using it as a material to hold a load. On a 3D printer, the grain is strongest along the X- and Y axis, these are the "flat" axes on the bed. This means the object is weakest on the Z axis, which is the upwards axis. 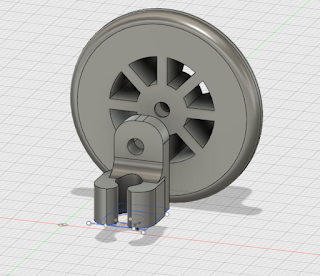 Finished copy of the most imported parts from the wheel.

The knowledge of the grain in a printed object should be used to make stronger objects when possible. But this knowledge was what made making the axle so difficult. Ideally the axle/metal rod holder would be printed on its side. This would mean it could withstand higher forces in the vertical axis after it was put in place. However, printing sideways would mean the metal holder would be made with support material, which would decrease their strength. There would be no use having the cart holder be strong to vertical forces, if one of the plastic nubs would break so it couldn't hold the cart in the first place!
If the axle/cart holder was printed upright like in the picture above, the axle part would be very week to shock. Meaning it couldn't hold a lot of weight and could snap at any moment. Like the picture above is hinting at, my solution was to not print the axle at all, just the metal rod holder. Instead I would model the wheel and cart holder to use a M3x16mm machine screw as the axle. This would make it much stronger, and if I used a lock nut instead of a regular nut, the wheel would still spin freely.

I'm quite pleased with how the final model came together. While printing the wheel I paused the printer and put in a M3 nut. After starting the printer again it kept on printing above the nut, meaning it became fully integrated into the wheel itself. See the picture below. 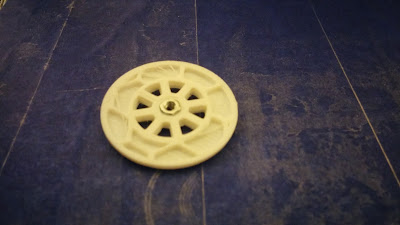 After the wheel was printed I fastened the screw really tight into the nut, from the front side of the wheel. This made the plastic wheel and metal screw act as one solid part. After the screw/axle was in place I just put on a couple of metal washers and the metal rod holder, before everything was put together with a nut on the end. 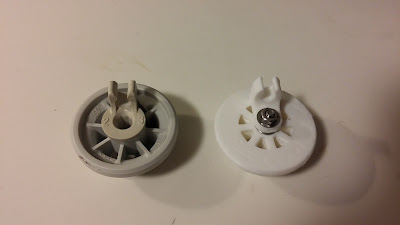 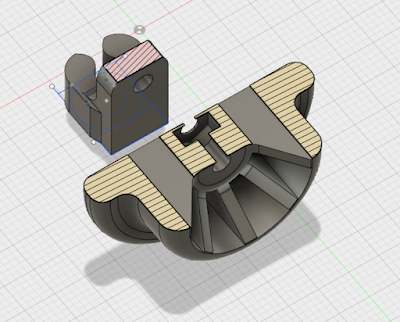 How the wheel was modeled with space for a M3 nut. After placing the nut during printing the printer would keep on adding plastic on top it.