Another update on the ongoing project of headset size reduction. I've previously written about the tear down of the old headset and a test print of the design.
I have now worked through the design I had for the ear muffs and head band I printed as test pieces. Originally, I was going to only slightly alter the ear muff design by scaling it to make it a bit taller. Instead I chose to completely model it from scratch again, only keeping my original measurements. I made this decision because I had learned several new techniques in Fusion 360.

Here's a comparison between the first test pieces, in blue, and the final design, in silver. At this point I've painted the silver parts with a couple coats of primer. I'm going to lightly sand these before they get some shiny, black spray paint. 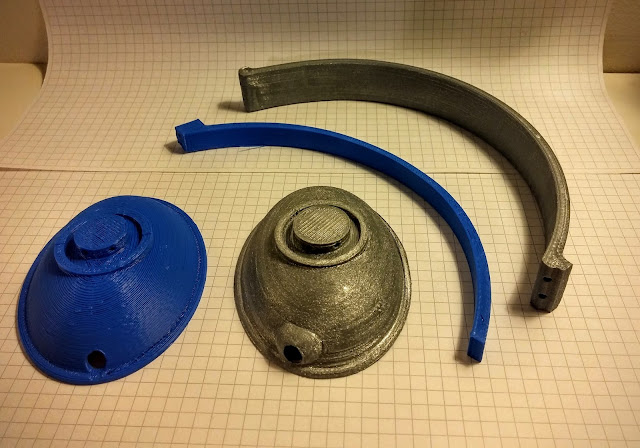 The differences between the two design are that the ear muffs in version two of the design are taller, and thus more rounded. This gives two improvements over the previous design: The sound is more well rounded, and it looks more streamlined - which in my opinion looks much better. I also added a small protrusion at the hole for the audio jack. This has the benefit of letting the female audio jack sit closer to the the shell of the ear muff. Which in turn means that I don't have the push the audio cable as far into the headset. 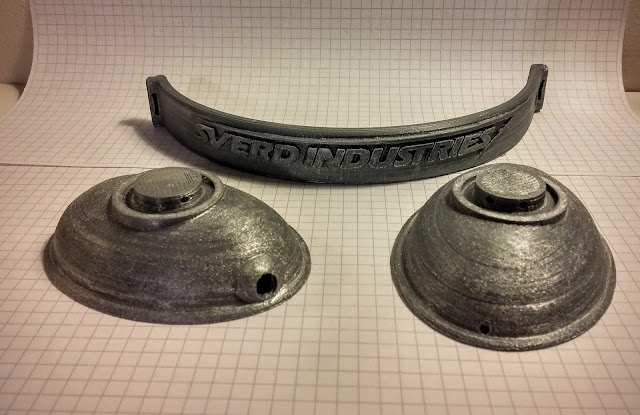 Of course I'm adding my own logo when I make something completely custom!

You always have to balance between a final cost increase from prototyping, and keeping the final cost as low as possible. For this design I did one test print with material that now has to be thrown away. It would could have been better for the final design to do a couple more test prints, but that would have greatly increased the total material used to do this headset remake. I believe I made the right decision by doing one run of test prints and then springing for finishing the headset.

Still, I might have to make one more iteration of the head band. It was printed with 10% infill and this made the band to stiff. When pulled over your head, the band wont flex enough so it's a bit tight. I'm going to fix this either by reprinting the band without infill, or by modifying the band by decreasing it's structural integrity.